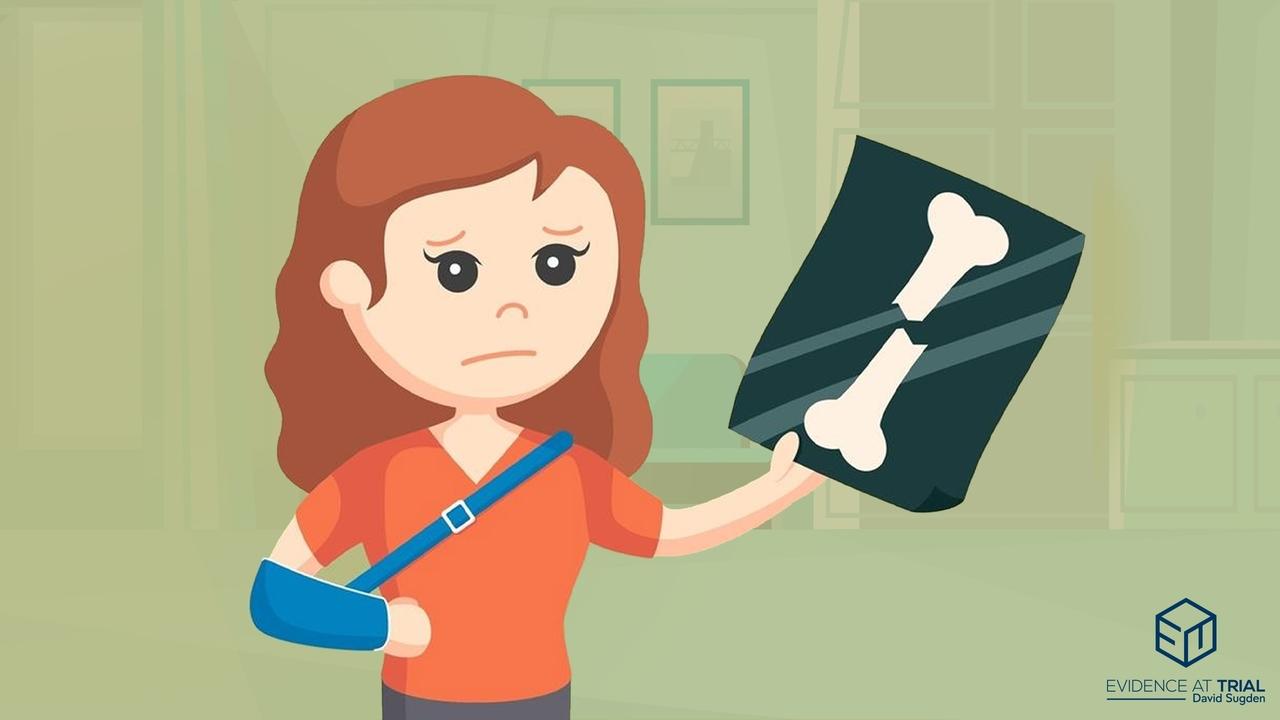 "I'll see you in court!" It's one of those lines that seems to make its way into any courtroom drama. But like a judge banging a gavel, some things make for good television but never actually happen in real life.

This is not to say lawyers are immune from having their share of meaningless colloquialisms. Take "battle of the experts." Attorneys toss around this phrase to describe certain cases or trials as basic coin flips. That upcoming trial about an allegedly defective widget? Don't ask me. It's a battle of the experts. It can be a smart-sounding way for lawyers to distance themselves from accountability for the result.

The danger of thinking a case will turn on expert testimony is that lawyers can become vulnerable to seeing their role as mere spectators. These lawyers will essentially instruct their expert witnesses to explain (1) why his or her opinion is right, and (2) why his or her adversary's opinion is wrong. And after that, hope for the best. After all, the case is a battle of the experts.

In addition to mastering the skill of examining expert witnesses, lawyers must ensure that expert opinions are examined through the prism of admissibility. The recent case of Fernandez v. Alexander, 31 Cal. App. 5th 770 (2019), illustrates the importance of this practice.

Battle of the Experts on Summary Judgment?

Fernandez was a medical malpractice case decided by way of summary judgment for the defendant (and affirmed on appeal). A casual read of the case suggests that summary judgment should not have been available because the expert witness declarations were essentially at odds with each other. The defense expert attested that he was an experienced orthopedic surgeon and, based on his examination of the medical records, the defendant did not cause the plaintiff any harm. Not so, attested the plaintiff's experts (another experienced orthopedic surgeon). Based on that expert's review of the same records, the defendant did cause the plaintiff harm.

Isn't this a classic battle of the experts? Shouldn't summary judgment be denied so the jury can figure all this out? A closer examination of the case and declarations underscores the role that lawyers play in these so-called battle of the expert cases.

In November 2014, Ms. Fernandez fell and fractured her left wrist. An x-ray was taken at an emergency room and she was placed in a splint cast. Id. at 773. Ms. Fernandez later saw her primary doctor, who referred her to the defendant, Dr. Alexander. Id.

Dr. Alexander moved for summary judgment in March 2017 and argued (1) his treatment of Ms. Fernandez was within the standard of care, and (2) no act or omissions on his part caused her injuries. In support of his motion, Dr. Alexander submitted a declaration from Dr. Charles Resnick, a board-certified orthopedic surgeon who specializes in hand and wrist surgery. Id. at 775.

Dr. Resnick reviewed the relevant records, depositions, and discovery responses and offered a declaration wherein he opined, in relevant part, that (1) Dr. Alexander's medical treatment of Ms. Fernandez fell within the standard of care, (2) the standard of care permitted either (a) surgery, or (b) casting, and (3) nothing Dr. Alexander did or failed to do caused Ms. Fernandez any harm or injury. Specifically on this last point, Dr. Resnick explained that "[t]he callous formation and dorsal angulation ... was a potential outcome of both casting and/or surgical intervention." Put another way, whatever adverse reaction Ms. Fernandez had with her cast could have just as likely occurred with surgery. 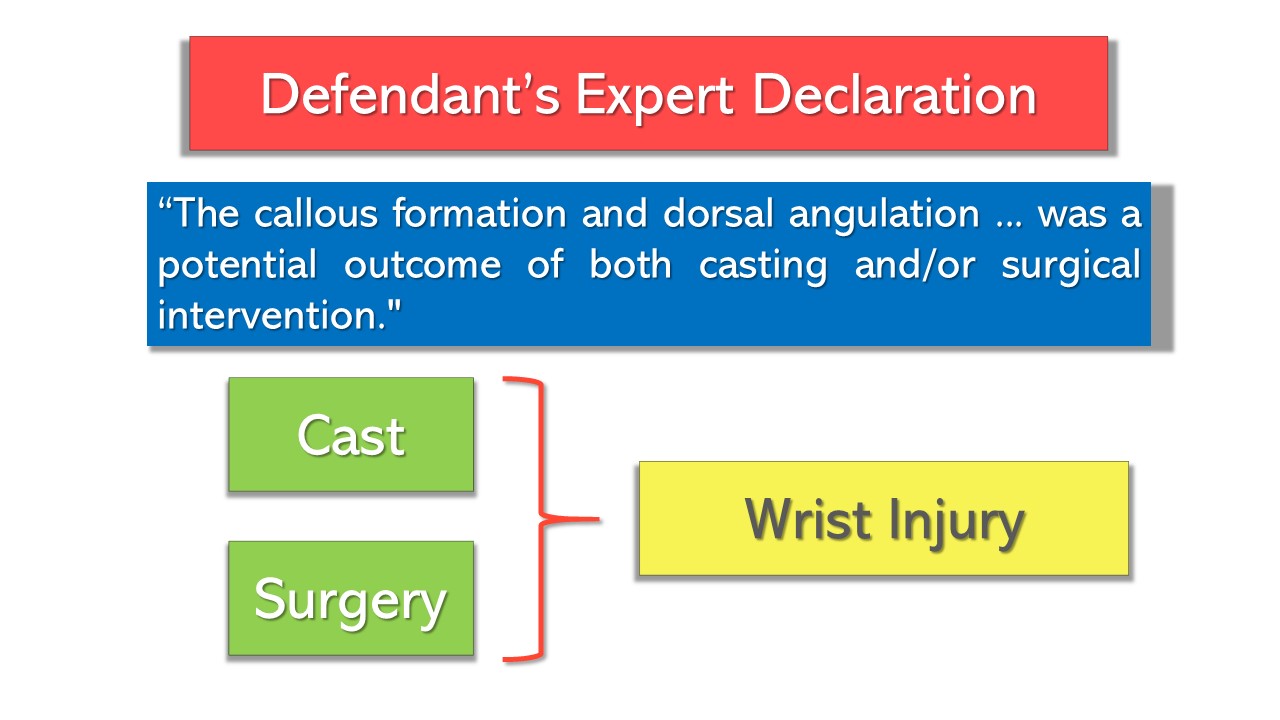 Ms. Fernandez did not object to the admission of Dr. Resnick's declaration. However, in support of her opposition to the summary judgment motion, she offered the declaration of Dr. Robert Gelb. Dr. Gelb was also an experienced orthopedic surgeon with a sub-specialty in hand surgery. Id. at 776. Dr. Gelb's declaration included the following:

Based on my review of [various] records, and on my own education, training, and experience, it is my professional opinion based on a reasonable degree of medical probability that[:]

[1] [T]he care and treatment rendered by [Dr. Alexander] fell below the standard of care and caused [Ms. Fernandez's] further deformity of her left wrist[;]

Reduced to its essence, Dr. Gelb's declaration can be illustrated as follows: 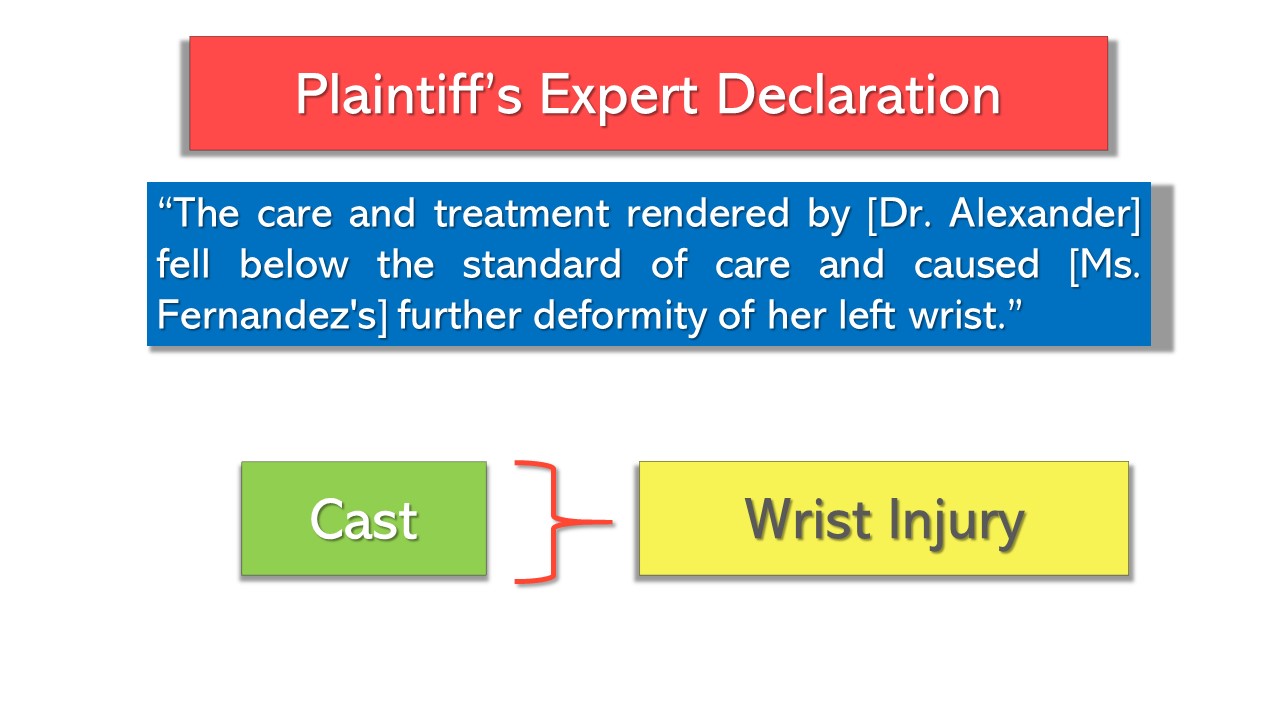 In Dr. Alexander's reply, he argued that Dr. Gelb's causation opinions were "unmoored from factual underpinnings." Id. at 776 - 777. Dr. Alexander also provided a single objection to Dr. Gelb's declaration, stating that "Dr. Gelb's causation opinions fail to create a triable issue of material fact. As such [Dr. Alexander] objects to the entire Declaration." Id. at 777. More specifically, Dr. Alexander argued that "Dr. Gelb's Declaration does not dispute Dr. Resnick's analysis or opinions, namely that 'the callous formation and dorsal angulation of the patient's hand ... was a potential outcome of both casting and/or surgical intervention'.... Therefore, Dr. Gelb's conclusory allegations will not suffice to raise a triable issue of fact as to causation." Id.

The trial court overruled Dr. Alexander's objection to Dr. Gelb's declaration, but the trial court granted summary judgment in Dr. Alexander's favor. The court ruled that "while plaintiff produced sufficient evidence to raise a triable issue of material fact as to whether defendant complied with the standard of care, plaintiff did not meet her burden of producing evidence that defendant's acts or omissions were a substantial factor in causing plaintiff harm." Id. at 778. Ms. Fernandez appealed the court's ruling.

The Court of Appeal affirmed. Focusing on the sole issue of causation, the Court examined the competing expert witness declarations. As an initial matter, the Court reiterated the utility of expert witness declarations in summary judgment motions: "An expert witness declaration is admissible to support or defeat summary judgment if the expert's testimony would be admissible at trial in accordance with Evidence Code section 720. An expert may testify to an opinion on a subject 'that is sufficiently beyond common experience that the opinion of an expert would assist the trier of fact.'" Id. at 779, citing Bozzi v. Nordstrom, Inc., 186 Cal. App. 4th 755, 761 (2010). And while it is true that declarations in support of summary judgment should be strictly construed while those in opposition should be liberally construed, the rule remains that "[o]nly admissible evidence is liberally construed in deciding whether there is a triable issue." Bozzi, 186 Cal. App. 4th at 761.

Turning to the declarations at issue, Dr. Resnick opined that "[t]he callous formation and dorsal angulation of [Ms. Fernandez's] hand ... was a potential outcome of both casting and/or surgical intervention." Fernandez, 31 Cal. App. 5th at 779 - 780. Ms. Fernandez argued that Dr. Resnick's opinion was speculative and thus Dr. Alexander failed to carry his burden of producing evidence demonstrating that there was no triable issue of material fact. Ms. Fernandez's first problem with this argument was that she did not object to the admissibility of Dr. Resnick's declaration in the trial court. Id. at 780. And as to the substance of the argument, the Court of Appeal disagreed. Dr. Resnick was an experienced orthopedic surgeon. California Evidence Code section 801 provides that a proper basis for an expert's opinion can be the expert's "special knowledge, skill, experience, training, and education...." And the Court explained that "we are directed to no authority requiring statistical studies to support an opinion that is based on an expert's extensive practical experience in the relevant field." Fernandez, 31 Cal. App. 5th at 780.

Turning to Dr. Gelb's declaration, the Court focused on what he opined with respect to the specific issue of causation. Dr. Gelb simply stated that "based on the records and his training and experience, his opinion, based on a reasonable degree of medical probability, was that defendant's care and treatment 'caused Plaintiff's further deformity of her left wrist.'" Id. The declaration then goes on to discuss Dr. Alexander's failure to obtain various consents, but the declaration does not explain how the lack of such consents caused Ms. Fernandez's injury. And even if Dr. Gelb's statement that the casting of Ms. Fernandez's wrist caused an injury, Dr. Gelb's declaration "[did] not opine that surgery would have produced a better outcome. Dr. Gelb's declaration does not challenge or even address Dr. Resnick's opinion that what happened to [Ms. Fernandez's] hand (the callous formation and dorsal angulation) was a potential outcome of both treatments." Id. at 781. 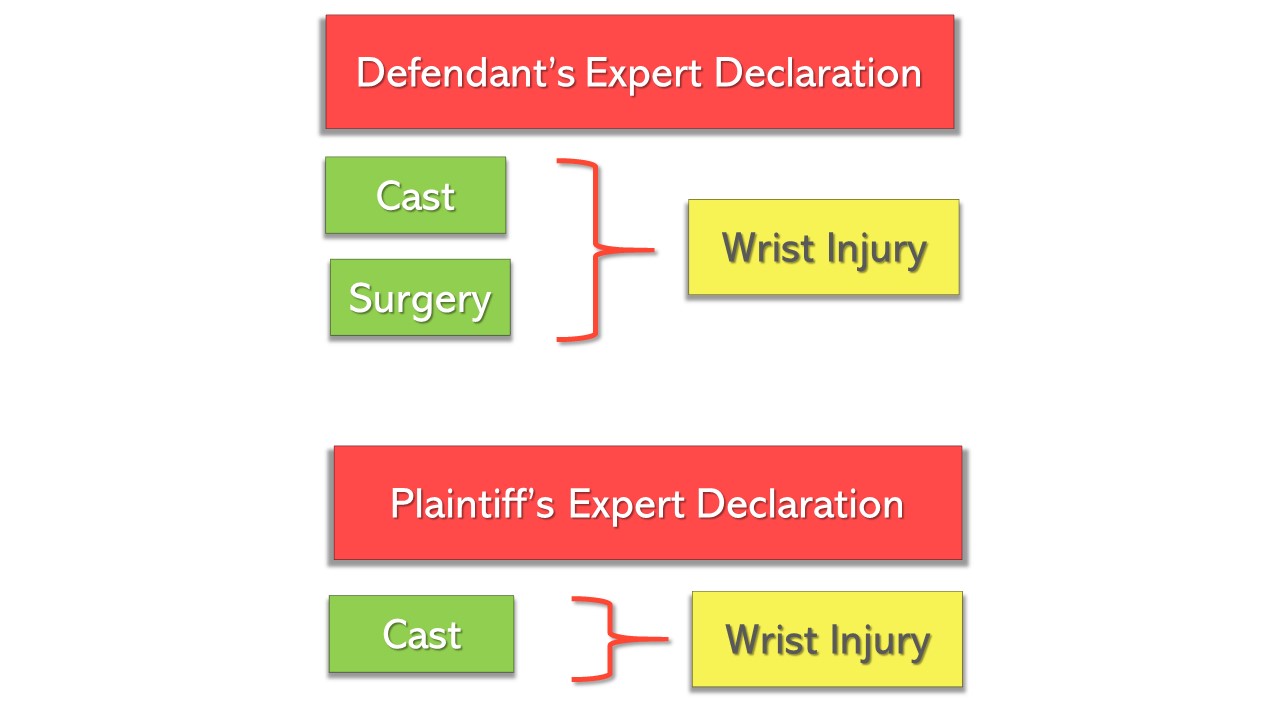 When examining expert declarations (and expert testimony), beware of the say-nothing sleight of hand. Experts can lull opponents into thinking they are saying a whole lot of complicated information by waxing on about their credentials, prior testimony, materials reviewed, etc., and then delivering a punchline that essentially states "In my expert opinion, I disagree with the opposing expert." Fernandez v. Alexander illustrates the importance of getting past the expert jargon to examine and challenge the essence of what is opined.