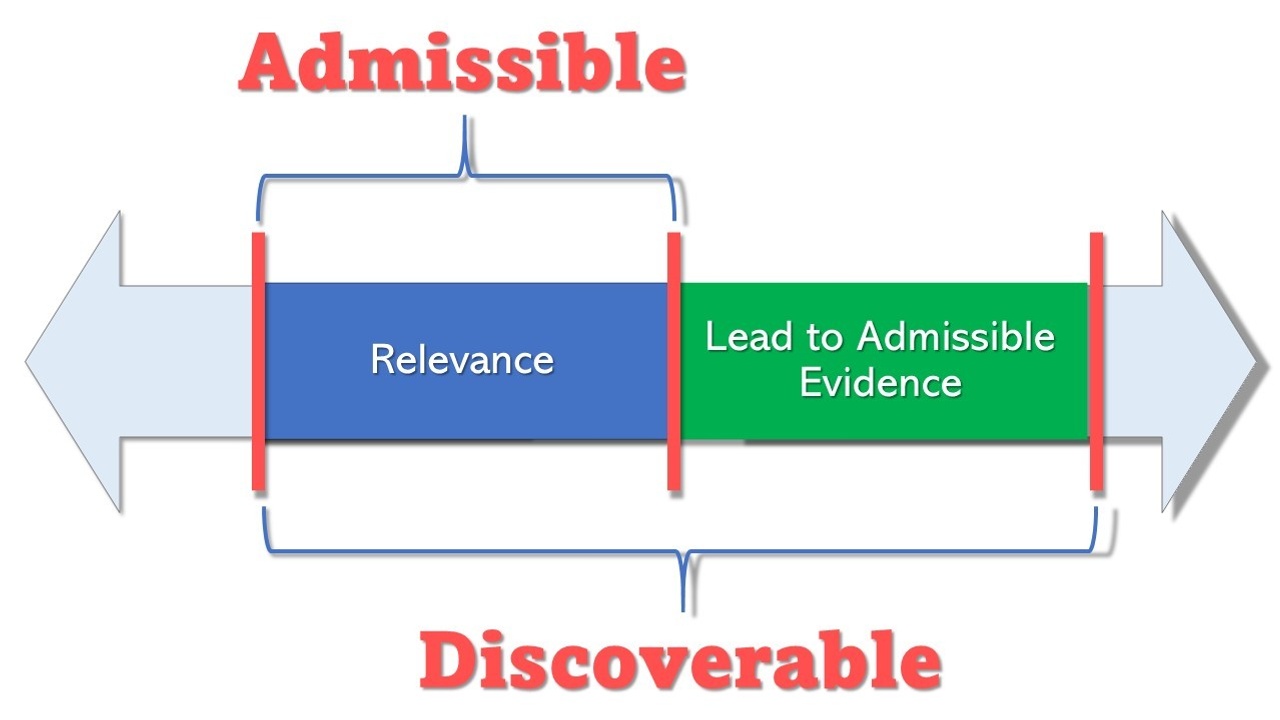 At a recent deposition, I intended to ask the plaintiff about some assertions made in a pretrial settlement demand letter. Unfortunately, my opposing counsel had different intentions:

MR. SUGDEN: I'm handing you what's been marked as Exhibit 25.

(Whereupon Exhibit 25 was marked for identification, a copy of which is attached hereto.)

MR. SUGDEN: Have you seen this letter before today?

OPPOSING COUNSEL: Objection. This is a settlement communication, and based on that I'm going to instruct the witness not to answer any questions regarding this document.

MR. SUGDEN: On what grounds?

OPPOSING COUNSEL: On the fact that it's a privileged and confidential settlement communication pursuant to California Evidence Code 1152, just as it says so on the top.

MR. SUGEN: [Section] 1152 talks about admissibility of settlement communications at trial for purposes of showing liability. You have a number of factual statements in here, and I'm wanting to see if they're accurate or not. So what you've articulated would be an admission issue at trial, not a discoverability issue.

After what seemed like a productive meet and confer on record, I was optimistic that I could ask the witness some questions about certain factual allegations in her demand letter. Here is how it went:

Q  If you could, take a look at page 3 of that letter.

OPPOSING COUNSEL: I'm going to instruct the witness not to do that.

So my optimism was a tad misguided.

The above exchange, however, is all too common. Attorneys often assume that any communication that encompasses a settlement offer, demand, or negotiation is automatically off-limits for all purposes. But a close reading of Section 1152 suggests the rule may be more limited:

Evidence that a person has, in compromise or from humanitarian motives, furnished or offered or promised to furnish money or any other thing, act, or service to another who has sustained or will sustain or claims that he or she has sustained or will sustain loss or damage, as well as any conduct or statements made in negotiation thereof, is inadmissible to prove his or her liability for the loss or damage or any part of it.

Section 1154 deals with settlement demands, and it provides as follows:

Evidence that a person has accepted or offered or promised to accept a sum of money or any other thing, act, or service in satisfaction of a claim, as well as any conduct or statements made in negotiation thereof, is inadmissible to prove the invalidity of the claim or any part of it.

A survey of the cases that have examined Sections 1152 and 1154 in the discovery context are must-know cases to ensure a proper application of the policies articulated in these Evidence Code sections.

Settlement Discussions Might Be Confidential (and Inadmissible), But They Aren't "Privileged"

Attorneys often presume that settlement communications are "privileged," and thus not admissible (or discoverable) for any purpose. In the deposition above, my opposing counsel described his pretrial demand letter as "a privileged and confidential settlement communication[.]" This is incorrect, and this is especially important because California Code of Civil Procedure section 2017.010 provides the allowable scope of discovery:

Unless otherwise limited by order of the court in accordance with this title, any party may obtain discovery regarding any matter, not privileged, that is relevant to the subject matter involved in the pending action or to the determination of any motion made in that action, if the matter either is itself admissible in evidence or appears reasonably calculated to lead to the discovery of admissible evidence.

Turning from Section 2017.010 to the Evidence Code, the plain language of Sections 1152 and 1154 make no mention of settlement discussions being "privileged." Privileged matters are defined in division 8 of the Evidence Code, comprising sections 900 to 1070. Sections 1152 and 1154 are contained in division 9. "The statutory protection afforded to offers of settlement does not elevate them to the status of privileged material." Covell v. Superior Court, 159 Cal. App. 3d 39, 42 (1984). The inquiry must therefore turn on "whether settlement negotiations is 'relevant to the subject matter involved in the pending action,' or 'appears reasonably calculated to lead to the discovery of admissible evidence.'" Id. A visual way to think about the scope of Section 2017.010 is the following: 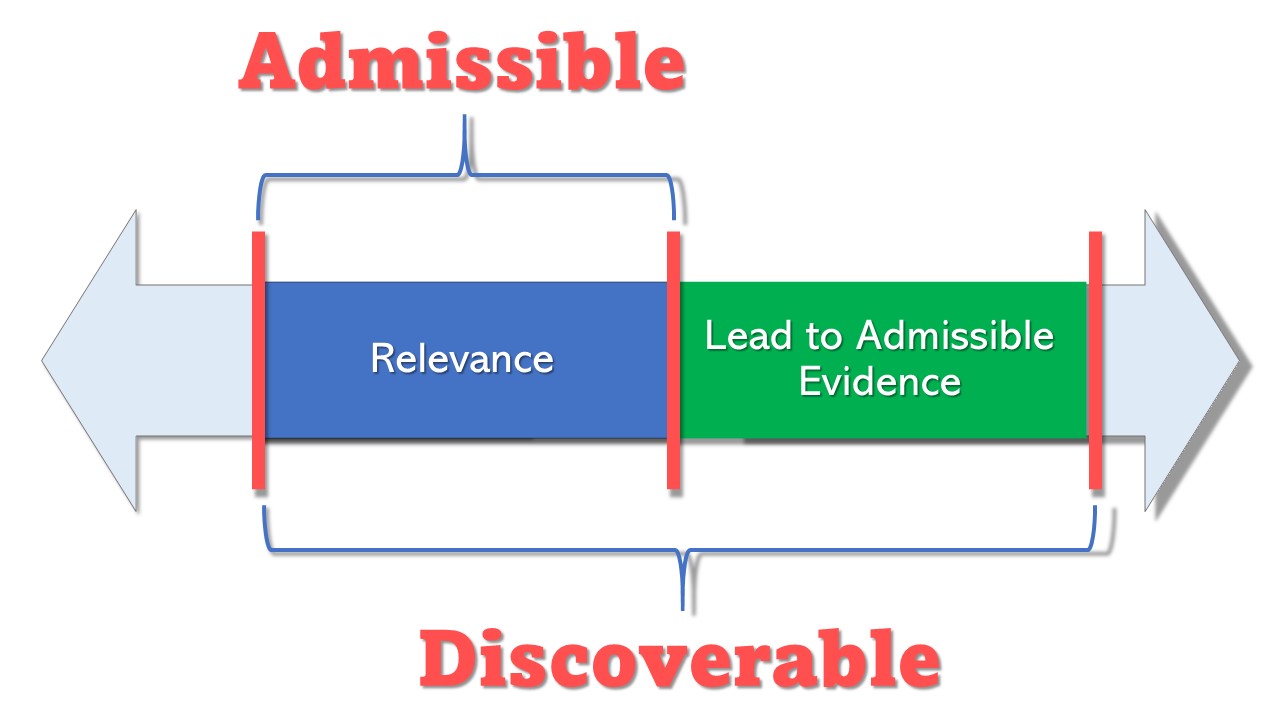 The plaintiff in Covell was Lyman Covell, and he was a defendant in an earlier lawsuit. After prevailing, Mr. Covell sued Lawrence Drasin for malicious prosecution. When Mr. Drasin's attorney took Mr. Covell's deposition, Mr. Covell was asked "about any settlement offers he had made--or which counsel had made on his behalf--in the earlier action." Id. at 41. When he refused to answer the questions, Mr. Drasin filed a motion to compel (which the trial court granted). Mr. Covell filed a petition for a writ of mandate, and the Court of Appeal agreed to review the matter. Id.

The Court framed the issue as "consider[ing] whether the public policy, enunciated in ... [S]ection 1152 ... which makes inadmissible evidence of an offer to settle or compromise a claim, also precludes pretrial discovery of such offers." Id. at 41 - 42.

The Court first reiterated that settlement communications are not privileged. Instead, the inquiry must focus on California Code of Civil Procedure section 2017.010--i.e., whether the information is relevant or reasonably calculated to lead to the discovery of admissible evidence. Id. at 42.

The Court rejected the argument. The Court explained that a settlement offer cannot be used to establish the validity of a claim because "[a] defendant will often attempt to buy peace, for economic reasons, even in a frivolous lawsuit." Id. In addition, the issue in a malicious prosecution case is whether Mr. Drasin (not Mr. Covell) believed he had probable cause or whether he acted out of malice. Mr. Covell's belief as to any validity of the earlier lawsuit was irrelevant. Id. Accordingly, the Court issued a writ of mandate directing the trial court to grant a new order denying Mr. Drasin's motion. Id.

Limiting Covell to its Facts

Volkswagen was a lawsuit initiated by Buddy Rusk, Sr., and he alleged that Volkswagen (among other defendants) caused him to suffer injuries from asbestos exposure. Id. at 1485 - 86. During discovery, Volkswagen requested that Mr. Rusk produce various documents that he had submitted in bankruptcy proceedings involving other companies whom Mr. Ruck alleged cause his injuries. Id. at 1486. Mr. Rusk refused to produce the documents, and he opposed a motion to compel on the grounds that "[a]ll documents relating to [his] claims filed with these [bankruptcy proceedings] contain ... [documents related to the parties'] effort to negotiate a settlement." Id. at 1489. The trial court ordered a limited production of documents and Volkswagen filed a petition for a writ of mandate, which the Court granted.

The Court first acknowledged the obvious: if something is admissible, it is absolutely discoverable. Id. 1490. But the Court cautioned that "the inverse is not necessarily true: the fact that evidence is not admissible does not mean that it is also not discoverable." Id. Accordingly, the Court explained that "Rusk's argument that the documents Volkswagen seeks are protected from discovery by Evidence Code section 1152 provides no justification for the trial court's ruling." Id. at 1491 (emphasis added).

The Court then looked at the document requests through the lens of Civil Procedure Code section 2017.010. In doing so, the Court acknowledged that heightened standards for discovery may apply when dealing with confidential or sensitive information (e.g., sensitive medical information having nothing to do with the issues in litigation; sensitive third-party information, etc.). With respect to the documents Volkswagen sought, however, the Court explained that there was "no reason to provide heightened protection for information concern [Mr.] Rusk's work history, which plainly is relevant and not confidential, or concerning his medical condition which is directly at issue and undoubtedly substantially disclosed in materials that have already been produced during the course of discovery." Id. at 1492. Accordingly, the Court vacated the trial court's order and ordered it to issue a "new order consistent with [its] opinion." Id. at 1497.

In Truestone, Inc. v. Simi West Industrial Park, 163 Cal. App. 3d 715 (1984), the plaintiff Truestone, Inc. alleged it had a contract with Vista Builders, Inc. (Vista) to deliver construction materials to be used at a property owned by defendant Simi West Industrial Park II, aka Atoian and Associates (Atoian). Id. at 719. According to Truestone, it delivered the materials but was never paid. Truestone later stopped delivering the materials and recorded a mechanic's lien claim for the contract price (or the reasonable value of the materials). Id. In its complaint against Atoian, Truestone alleged that an account was stated with Atoian because it "acknowledged that Truestone [was] a creditor for $17,898 by reason of materials supplied to the development...." Id. at 719. In that same letter, Atoian proposed to pay Truestone $12,170 as a compromise of the total debt. Id. at 719 - 720.

When Atoian answered Truestone's lawsuit, it acknowledged ownership of the property and its contract with Vista. But Atoian denied liability as to Truestone, and it argued that Truestone's mechanic's lien was invalid. Id. at 720. Atoian later filed a motion for summary judgment wherein it argued that (1) the mechanic's lien was procedurally defective, and (2) it never promised (expressly or implicitly) to pay Truestone anything (thus, the argument went, Truestone could not pursue any claims for an account stated). In support of this second argument, Atoian argues that its prior letter acknowledging certain amounts owed to Truestone was "an offer to compromise and was not an account stated." Id.

Atoian moved for summary judgment, and Truestone opposed the motion with various declarations attesting that Atoian would pay Truestone "if Truestone would continue to furnish said materials." Id. at 720 - 721. Truestone also relied on Atoian's letter showing a debt of $17,898 but offering to pay $12,170. The trial court granted summary judgment, and the Court of Appeal reversed.

The Court explained that even if the letter constituted a compromise offer, it could "nonetheless be admitted as an admission against interest, independent of the compromise offer. '[T]he statements of a party against whom a claim is made, that he is willing to settle the claim, when not connected with an offer in compromise, may be proved as an admission against interest.'" Id at 725, citing Moving Pictures Etc. Union v. Glasgow Theaters, Inc., 6 Cal. App. 3d 395, 402 (1970).

The Evidence Code prohibits the admission of settlement offers, demands, and negotiations to prove liability or viability of claims. But that's it. Unlike information that is privileged, and thus protected from discovery, settlement communications require a more fact-specific inquiry to determine whether such communications might be discovered (or admitted).