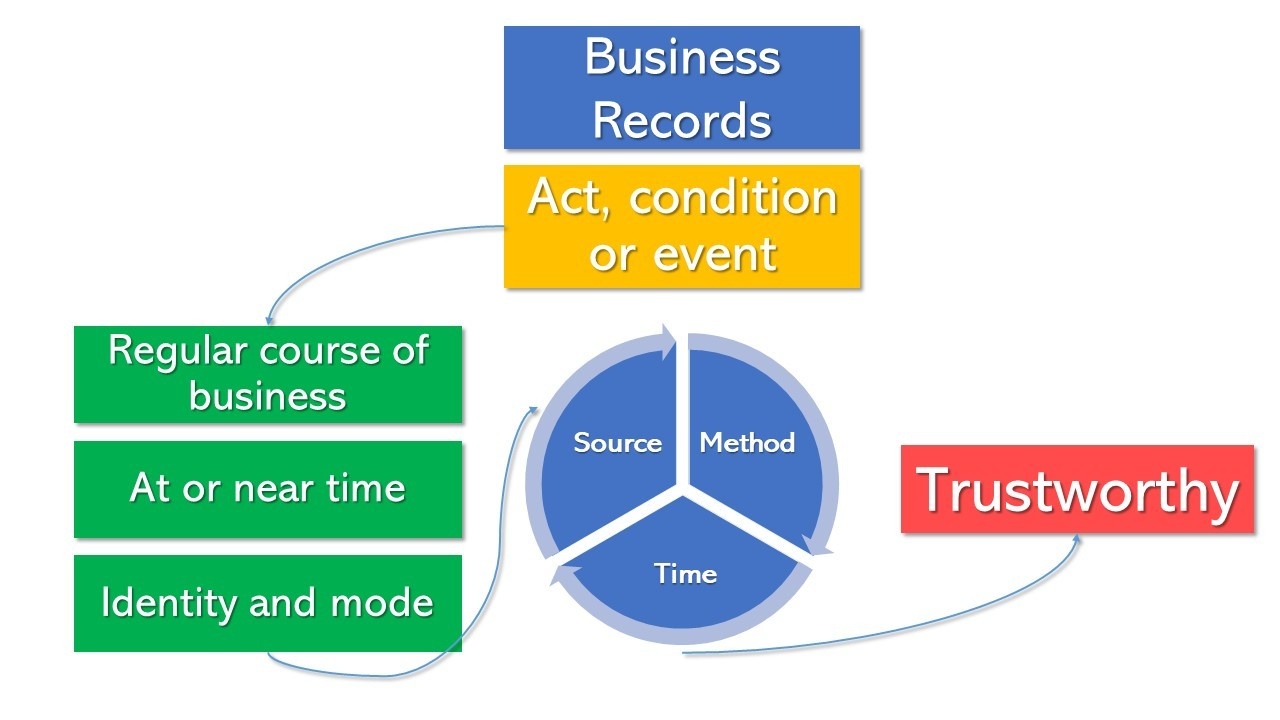 Must documents always be produced to proof their contents? What if the documents are lost or missing? California's secondary evidence rule (Cal. Evid. Code §§ 1521 - 1523) provides a commonsense approach that begins with a simple general rule: "The content of a writing may be proved by otherwise admissible secondary evidence." Cal. Evid. Code § 1521(a). But this general rule of admissibility does not apply if the court finds either (1) a genuine dispute exists concerning material terms of the writing and justice requires its exclusion, or (2) admission of the secondary evidence would be unfair. Id, §1521(a)(1), (2).

Put another way, if documents are not available, a witness may testify about the documents' content so long as (1) the testimony is "otherwise admissible," and (2) allowing the testimony is not unfair. Even simpler, the secondary evidence rule cannot be used as an end-run around the rules of evidence.

(a) The writing was made in the regular course of a business;

(b) The writing was made at or near the time of the act, condition, or event;

(c) The custodian or other qualified witness testifies to its identity and the mode of its preparation; and

(d) The sources of information and method and time of preparation were such as to indicate its trustworthiness.

Crown sought to show that (1) Ms. Chambers received an arbitration agreement when she opened her credit card (and again when she received a replacement card a few years later), and (2) the agreement allowed Ms. Chambers to opt out of the agreement (and that Ms. Chambers failed to do so). Id.  at *1. To make these showings, Crown relied on an affidavit from a Synchrony employee who attested to the following:

While the declaration attached various billing statements, it did not attach any documentation regarding the supposed mailing of the arbitration agreement. Id. at *2.

Ms. Chambers opposed Crown's motion to compel arbitration on the ground that "... Crown had not shown she received the account agreement [with the arbitration provision] and failed to object." Id. Ms. Chambers objected to the above-affidavit, in particular objecting to the statement that "Synchrony's records show[ed] that ... the card and a copy of the [arbitration agreement] were mailed to Pam Chambers...." The trial court sustained Ms. Chambers' objections and denied the motion. With respect to the claim that the arbitration agreement was mailed, the court stated the following:

[The Synchrony employee] relie[d] solely on what "Synchrony's records show[ed]" to prove Synchrony mailed the arbitration agreement to Chambers. [The employee] does not describe what those records looked like (e.g., whether they were electronic or paper records) and does not testify regarding their reliability or why she is testifying as to their contents of those records rather than attaching the records to her affidavit. Further, [the employee] does not testify she has any personal knowledge regarding the mailing of the arbitration agreement outside what the "records show." Anderson provides no information regarding the regular business practices or procedures of Synchrony ... with regard to the mailing of credit card agreements.

Crown appealed the trial court's ruling, and the Court of Appeal affirmed.

Crown first argued that (1) the Synchrony affidavit was admissible under the secondary evidence rule (Cal. Evid. Code §§ 1521 - 1523), and (2) the underlying Synchrony documents qualified as business records (§ 1271).

Applying that principle to the facts, the Crown Court explained that the employee's "affidavit expressly referenced 'Synchrony records' as the basis for her statement that the credit card account had been mailed to Chambers. In order for [the employee's] statement to be admissible, the underlying Synchrony records would have to be admissible (among other conditions)." Id. at *6. Therefore, to determine the admissibility of those records (or the statements about them, under a secondary evidence analysis), Crown had the burden to establish the business records exception.

Turning to the business records exception, the Court acknowledged that the employee attested that she "regularly review[ed] and analyse[d] account records and transaction histories, including to and from cardholders." Id. However, the employee "[did] not say anything about their preparation. Nor [did] she describe the specific 'Synchrony records' she relied upon to state that Chambers had been mailed the account agreement." Id. Accordingly, "[t]he trial court could reasonably find that [the employee] had not shown those specific records—whatever they were—were made in the regular course of Sychrony's business." Id. In addition, "[i]nformation about the sources of information and the method and time of preparation of the records, including whether they were prepared at or near the time of alleged mailing, is completely absent from [the employee's] affidavit." Id.

Chambers v. Crown is a helpful example that illustrates the relationship among the various rules of evidence. While the secondary evidence gives parties the flexibility to prove the contents of an absent writing, it does not permit them to sidestep other requirements of admissibility.