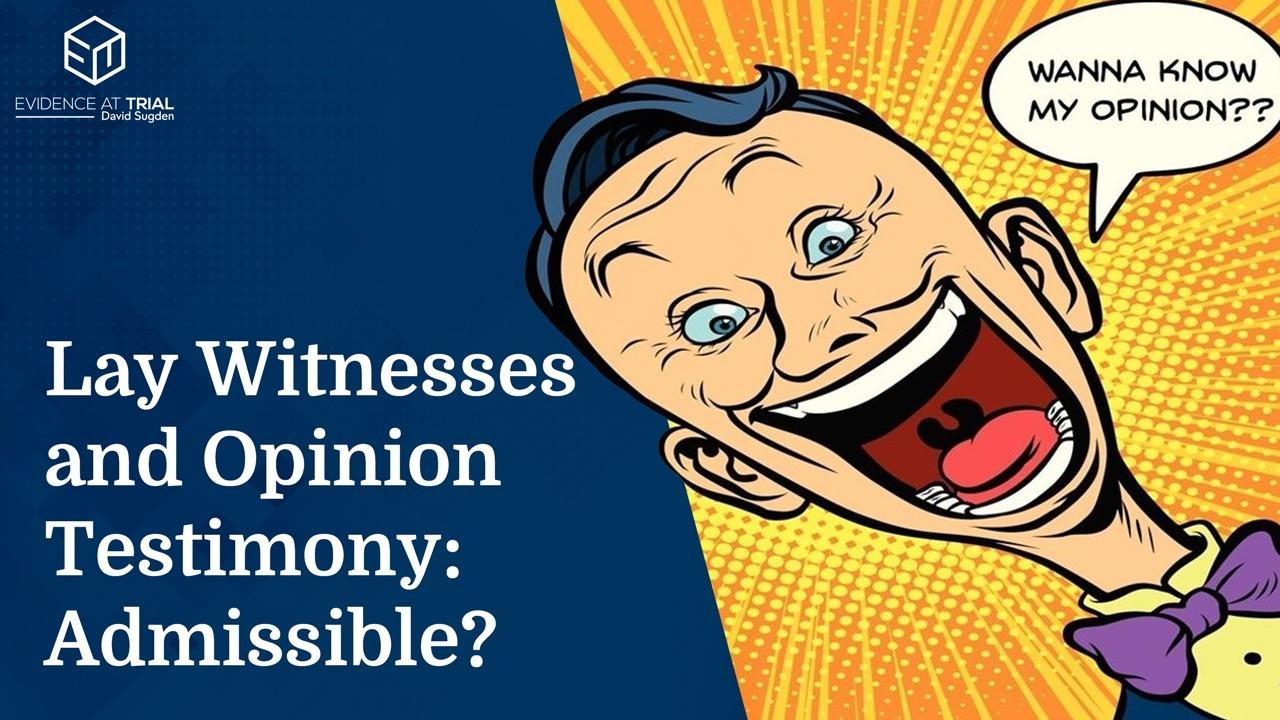 When it comes to expert witnesses, there can be a tendency to limit consideration to paid, third-party experts. And while these professional expert witnesses are the most common types of expert witnesses in civil litigation, they are certainly not the only types of witnesses who can provide expert testimony.

Similarly, California Evidence Code section 702 states that “… the testimony of a witness concerning a particular matter is inadmissible unless he has personal knowledge of the matter….” But this rule is “[S]ubject to Section 801,” which discusses the admissibility of expert opinion testimony.

An illustrative analysis of lay opinion analysis can be found in In re Automobile Antitrust Cases I & II, 1 Cal. App. 5th 127 (2016). In Automobile, certain purchasers of new cars in California sued a number of car manufacturers and dealer associations under the Cartright Act. The plaintiffs alleged the manufacturers and associations conspired to keep lower-priced (yet virtually identical) new cars from being exported from Canada to the United States. The result of this alleged conspiracy was keeping new car prices in California higher than they would be in a competitive market. Id. at 131. After years of litigation, the trial court granted summary judgment in favor of the remaining defendants in the case—Ford Motor Company (Ford U.S.) and its subsidiary, Ford Motor Company of Canada, Ltd. The trial court ruled that the plaintiffs failed to produce sufficient evidence of an actual agreement among Ford and the other manufacturers to restrict the import of new vehicles from Canada to the United States. Id. at 132.

At issue on appeal was whether the plaintiffs had presented any admissible evidence that there was at least a triable issue of fact as to whether Ford had participated in an illegal agreement to restrict the export of cars from Canada to the U.S. In Ford’s motion, it presented evidence that it had been combating these “gray market” exports for years. Ford’s conduct, it argued, was just as consistent with lawful competition as it was with an unlawful conspiracy. Id. at 137. And while Ford acknowledged attending several meetings with other manufacturers because of this shared challenge, Ford asserted that “no joint action was ever taken as a result of those meetings.” Id.

The plaintiffs argued that the trial court failed to consider (on hearsay grounds) deposition testimony of Toyota Canada’s general counsel regarding one of the meetings he attended. In relevant part, the testimony was as follows:

Q  Did CADA [Canadian Automobile Dealers Association] indicate that they would not support dealers who were involved in regular exporting of vehicles from Canada to the United States?

A  I can remember some comments being made that everyone supported the concept of trying to keep the vehicles in Canada, but who said what, on a general basis, I can’t help you there.

Q And that was your understanding that there was a general consensus that the vehicles would be kept in Canada, not be exported from Canada to the United States?

A  There was general support for the approach.

Q  Okay. Was there any agreement, at that meeting or any time, to work together to keep vehicles in Canada?

A  I think that would be characterizing it as a little more than what it was. It wasn’t an agreement. It was simply a concept that there was some consensus from everyone at the meeting.

When ruling on Ford’s motion for summary judgment, the trial court refused to consider the above testimony on hearsay grounds. Accordingly, the Court began its analysis there. The Court first pointed out the obvious: There is no hearsay issue because the testimony is from an out-of-court deposition. Id. at 143. Rather, the issue was whether the testimony would constitute hearsay if he were testifying as a witness in court. Id.

As a threshold matter, hearsay evidence is “evidence of a statement that was made other than by a witness while testifying at the hearing and that is offered to prove the truth of the matter stated.” Cal. Evid. Code § 1200(a) (emphasis added). “Statement” is defined as either “(a) [an] oral or written verbal expression[,] or (b) nonverbal conduct of a person intended by him as a substitute for oral or written verbal expression.” Id., § 225. Ford acknowledged that the general counsel was not repeating any “statements” as defined by the Evidence Code. Instead, Ford argued that the testimony was “inadmissible … because [it] ‘conveyed’ hearsay.” In re Automobile, 1 Cal. App. 5th at 144. According to Ford, “it is ‘clear that [the general counsel] was describing statements made by other participants in the meeting.” Id. (emphasis in original).

The Court disagreed, and it explained that “[n]one of the challenged testimony purported to recount ‘a statement,’ let alone to prove what was ‘stated.’” Id. The general counsel “was simply recounting generally his impressions and conclusions based on his participation in the meeting.” Id. (emphasis added). Accordingly, “[t]his is not hearsay, and the trial court erred in concluding that it was.” Id.

If Not Hearsay, Admissible?

To determine whether the statements were admissible, the Court first resolved any issues regarding the foundation of the witness’ testimony. The plaintiffs argued, and the court agreed, that the witness had personal knowledge as to the testimony because he was present at the meetings. However, the Court explained that “[w]hile this makes him competent to testify as to facts he personally observed, it does not necessarily make admissible his inferences drawn from those facts.” Id. at 145 (emphasis in original). The Court explained that personal knowledge did “not go far enough” to warrant admissibility because the Court had to next consider “the opinion rule….” Id. (emphasis in original).

When it comes to lay witness testimony, the opinion rule provides that “[i]f a witness is not testifying as an expert, his testimony in the form of an opinion is limited to such an opinion as is permitted by law, including but not limited to an opinion that is: (a) Rationally based on the perception of the witness; and (b) Helpful to a clear understanding of his testimony.” Id., citing Cal. Evid. Code 800. California’s Supreme Court has explained such opinion testimony should be limited to instances “where the concrete observations on which the opinion is based cannot otherwise be conveyed.” Id., citing People v. DeHoyos, 57 Cal. 4th 79, 130 – 131 (2013). The DeHoyos Court further explained this rule:

Such a situation may arise when a witness’s impression of what he or she observes regarding the appearance and demeanor of another rests on “subtle or complex interactions” between them or when it is impossible to otherwise adequately convey to the jury the witness’s concrete observations. A lay witness generally may not give an opinion about another person’s state of mind, but may testify about objective behavior and describe behavior as being consistent with a state of mind.

Common examples of when lay opinions have been permitted include “a lay witness … express[ing] an opinion that a person was ‘drunk,’ or that people engaged in a discussion were ‘angry,’ or that an impact was strong enough to jar a passenger from a seat, or that someone appeared to be ‘trying to break up a fight.’” In re Automobile, 1 Cal. App. 5th at 146, citing Osborn v. Mission Ready Mix, 224 Cal. App. 3d 104, 113 (1990).

Turning to the general counsel’s testimony, the Automobile Court held that his opinion that there was “some consensus” among the manufacturers to keep cars in Canada “was based on his personal knowledge gleaned from his own participation in, and observation of, that interaction, as well as his numerous previous contacts with the alleged co-conspirators.” Id. at 147. The Court further explained that “it is quite likely that his conclusions were based, at least in part, on observations regarding the appearance and demeanor of other meeting participants and rested on the ‘subtle or complex interactions’ among them.” Id., citing DeHoyos, 57 Cal. 4th at 130 – 131.

Lay Opinion: An End-Run Around Hearsay?

In its conclusion that the general counsel’s testimony was admissible lay opinion testimony, the Court included in its analysis the fact that the general counsel did not relay what was actually said at the meeting. The Court explained that “there is no indication in the record that [the general counsel] was able to recall any particular statements or actions by any of the meeting participants. Thus, his comments were useful to understanding what transpired at this all-important meeting because the concrete observations on which his opinion was based likely could not otherwise be conveyed.” Id.

The Court’s analysis begs some questions: Was the general counsel’s testimony only admissible because he did not recall what was actually said? Did his lack of a specific memory open a path to admissibility that would have otherwise been shut (on hearsay grounds) had the witness relayed the specific statements that constituted the alleged consensus? The most reasonable answer is probably not. Had the general counsel remembered the actual statements, the Court explained that they still would have been admissible under various exceptions to the hearsay rule:

Although not necessary to our resolution of this matter, we note that if statements attributable to all of the other participants at the … meeting were the basis for [the general counsel’s] conclusion that a consensus had been reached to keep Canadian automobiles in Canada, then any such statements would likely themselves be admissible as admissions of co-conspirators, because they would have then been made while participating in a conspiracy and in furtherance of the objective of that conspiracy. Indeed, such statements could also be understood as operative facts, evincing the conspiratorial agreement itself, and therefore be deemed admissible as nonhearsay.

The explanation is not entirely satisfactory. What if the parties were not co-conspirators? Can litigants get around hearsay by giving lay opinions (without words) about what was said? That seems like a bizarre result. But if a trial court were to allow such testimony, it is a good reminder for practitioners to hone their most important weapon when specious testimony is admitted: cross-examination.