This Land is Your Land ... Actually, this Land is My Land (Because My Dad Told Me) 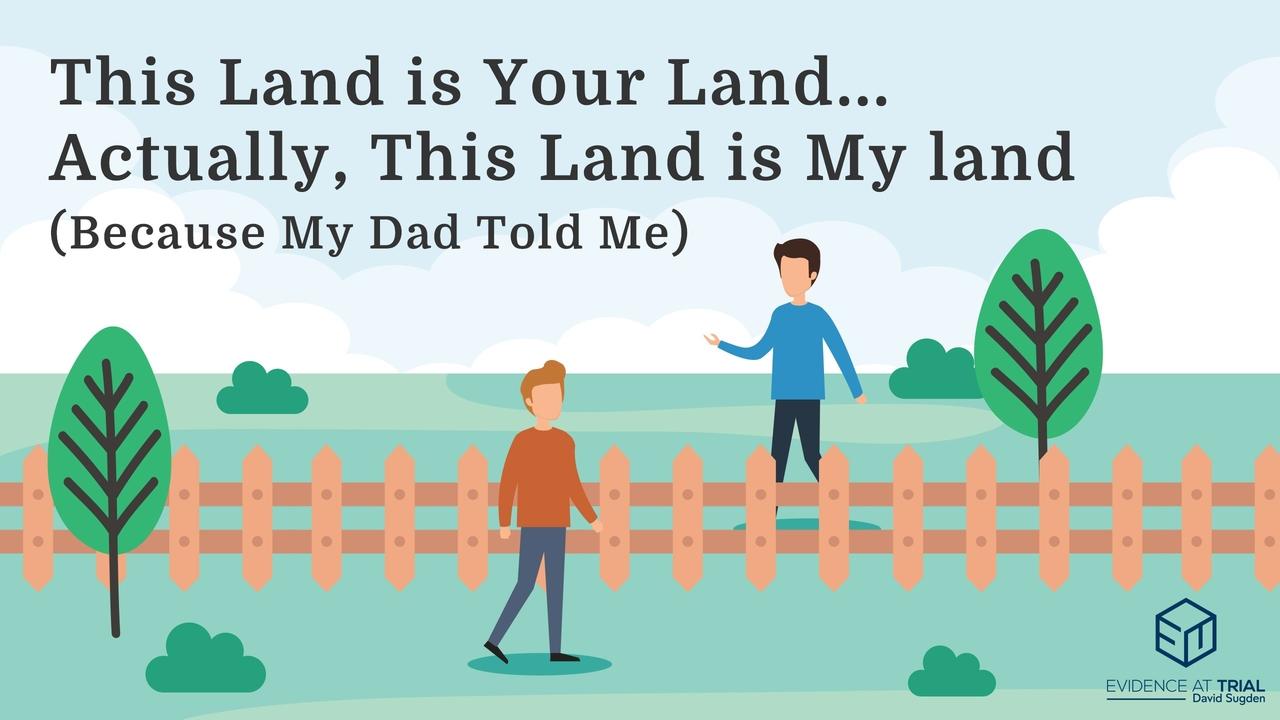 When it comes to hearsay, one method of spotting objectionable hearsay is to consider whether the probability of the evidence being true (or not true) turns on the credibility of someone who cannot be cross-examined. As Justice John Marshall wrote in Queen v. Hepburn, 7 Cranch 290, 296 (1813), "[i]ts intrinsic weakness, its incompetency to satisfy the mind of the existence of fact, and the frauds which might be practiced under its cover, combine to support the rule that hearsay evidence is totally inadmissible." Put another way, we cannot be satisfied that facts are true if they are not introduced through competent eye witnesses (and tested through cross-examination). Marshall's point was valid, but its application in Hepburn was harsh. The lawsuit was a petition for a declaration that Mima Queen was emancipated. Ms. Queen was represented by Francis Scott Key (apparently before he penned the Star-Spangled Banner), and the argument was that Mary Queen, Ms. Queen's ancestor, had been freed by her owner. Proving her ancestor's freedom was difficult because, as Justice Marshall astutely acknowledged, "the eye witnesses to that fact are dead."

There have been a few developments since Queen. The Civil War. Electricity. TikTok. And California enacted its Evidence Code. Like the Federal Rules of Evidence, California's Evidence Code includes a number of exceptions to the hearsay rule. From law school alone, most lawyers can rattle off a few memorable exceptions. Excited utterance? Dying declaration? Wasn't there something about an interesting declaration? Or was it a declaration against interest?

When a hearsay objection is made during trial, there's little time to explain (if asked) the reason it should be overruled. Trying to recall every exception or even having a cheat sheet with the exceptions is little help. Ten seconds of silence scrolling through an "exceptions list" can feel like an eternity.

A faster way to spot exceptions is needed. To do this, it is necessary to first recognize the type of evidence that typically create an exception. One category of exceptions is evidence that is trustworthy. If a company routinely relies on the accuracy of records as part of its business (long before any lawsuit was contemplated), those records are probably trustworthy enough to be admitted. Indeed, several exceptions include language explaining that admissibility turns on the evidence's trustworthiness. See e.g., Cal. Evid. Code § 1271(d) ("The sources of information and method and time of preparation were such as to indicate its trustworthiness.").

The second category is evidence that is necessary. Going back to Queen, Mima Queen lost her case, not because the evidence was not believable, but because it was not admissible. And yet how else was Mima Queen to prove her case? Accordingly, an exception to the rule was needed. To quickly determine whether an exception exists, therefore, consider whether the evidence is trustworthy, necessary, or both. The figure below illustrates a way to envision hearsay admissibility. 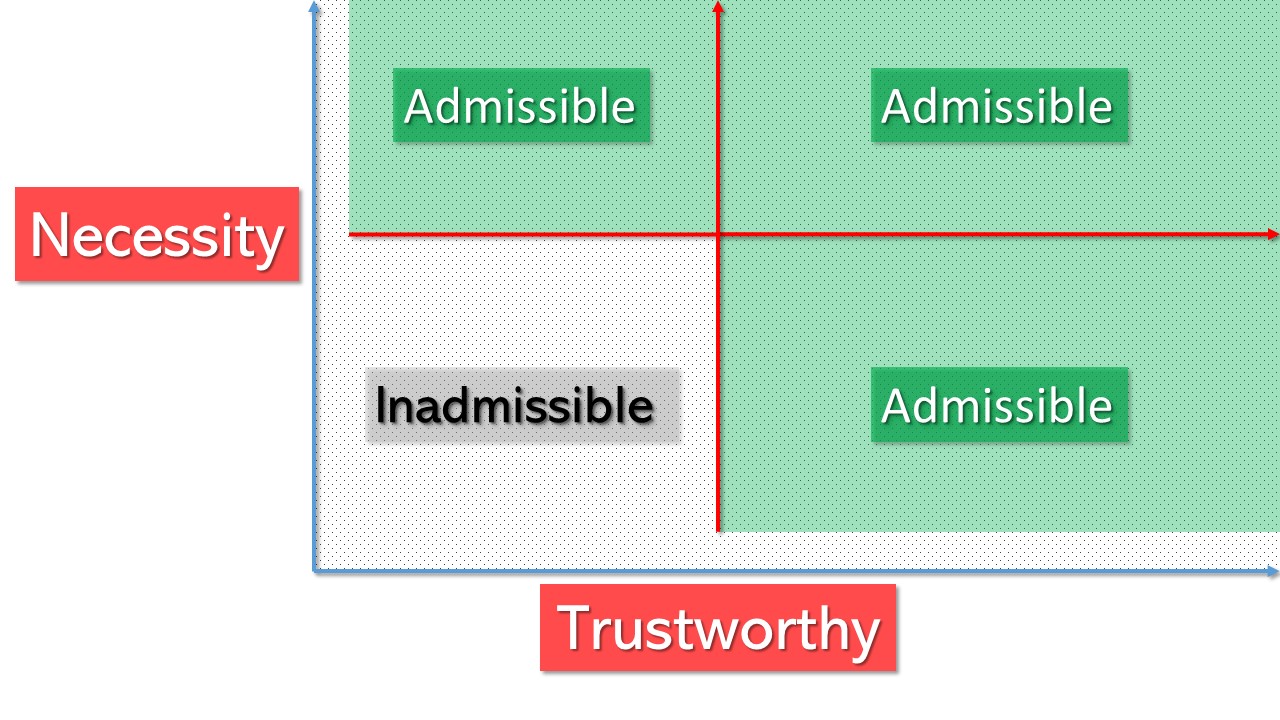 Here is a simplified version of the parties' dispute: The parties' adjoining ranches were in an area called "Section 10" in rural San Joaquin County. Id. at *1. The Public Land Survey System ("PLSS") is a way land in the United States is subdivided and described. Id. at *1, n.1. The PLSS typically divides land into 6-mile-square townships; townships are subdivided into 36 one-mile-square sections; and sections can be further subdivided into quarter sections, quarter-quarter sections, and so on. Id.

Prior to 1958, McDermott's predecessors owned seventy-five percent of Section 10 while Connolly's predecessors owned twenty-five percent. In 1958, the parties exchanged land within Section 10. As part of the transaction, a civil engineering firm prepared a sketch of the Connolly parcel. The sketch included markings for a fence, which was described as being "the south and west Section lines of Section 10 respectively." Id. at *2.

In 2009, the fence on the western side of Section 10 was damaged. McDermott hired Jon Lamb to survey the area to ensure that the fence could be rebuilt on the section line. Lamb discovered that the fence was not built on Section 10's lines. At the parties' trial, Lamb testified that where the fence was previously located was inconsistent with the legal description of the 1958 deed and documents related to the transaction. Id. at *3. The new fence, therefore, needed a new location.

Robert told Mark that there had "always [been] problems with the McDermotts." The McDermotts poached, hunted, and grazed their animals without permission on Connolly lands. Both parties also used a road that ran along Carnegie Ridge to the southern border of Section 10; the road was partly on McDermott's lands and partly on Connolly's ...

Robert told Mark that by 1958 he had grown frustrated. The parties considered putting up a fence or having the McDermotts pay rent, but ultimately settled on a land swap. Robert said his "objective" was to "create a defensible position from this trespass and hunting problem that he was having." The parties agreed the McDermotts would get the Connolly family's existing lands in Section 10 and Connolly's predecessors in interest would get "everything to the south and west of a fence that would run along the top of Carnegie Ridge."

Robert told Mark that the parties intended the deal to be "based on the fence lines."

The Court began its analysis with a discussion of Section 1323, which provides that "[e]vidence of a statement concerning the boundary of land is not made inadmissible by the hearsay rule if the declarant is unavailable as a witness and had sufficient knowledge of the subject, but evidence of a statement is not admissible under this section if the statement was made under circumstances such as to indicate its lack of trustworthiness."

McDermott essentially argued that Robert Connolly's statements were per se inadmissible because Robert Connolly owned the property when he made the statement (and thus had an interest in describing the terms of the 1958 transaction favorably to his interest). The Court rejected the notion that Robert Connolly's statement was automatically untrustworthy because he had an interest in the disputed lands: "Had the Legislature's intent been to make statements automatically inadmissible if the declarant had an interest in the disputed boundary, it could have said so." Id. at *7. Instead, as as prior cases have explained, "[a] statement is trustworthy within the meaning of section 1252 ... when it is 'made in a natural manner, and not under circumstances of suspicion.'" Id., citing People v. Harris, 57 Cal. 4th 804 (2013). The trial court correctly determined that Robert Connolly's statements (1) were made "well before any boundary dispute arose[,]" (2) were simply "his view as to why the exchange of the property was made," and (3) "coordinate[d] well with other testimony." Id. Finally, the statements "were made in a 'natural manner,' i.e., in conversations about the history of the property between father and son at a time when no boundary dispute existed." Id.

To understand the intent of the boundary agreement, out of court statements from Robert Connolly were necessary. The statute that allowed such testimony also required that the statements be trustworthy. The fact that his testimony aligned with other evidence in the case provided the trial court with the justification to conclude that it was. The next time you are trying to spot whether a hearsay exception applies, a quick consideration of whether the evidence is necessary, trustworthy, or both is an effective place to start.