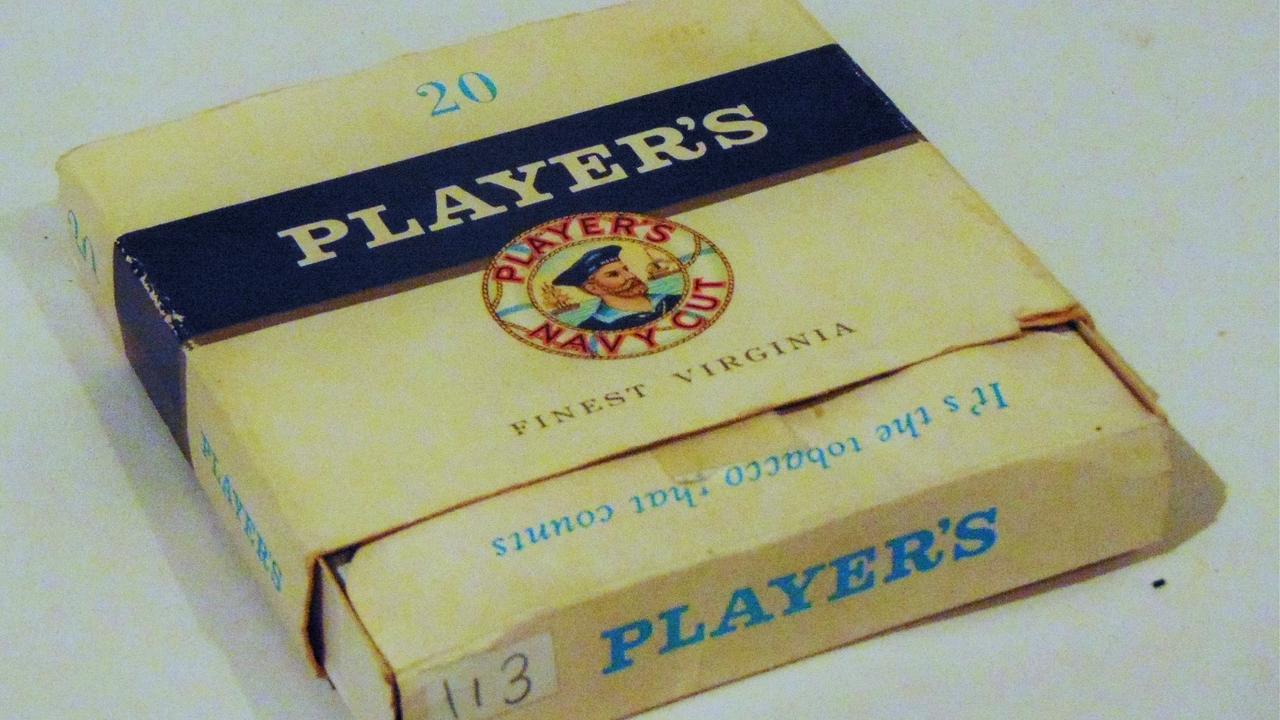 When it comes the rules of evidence, there can be a big difference between a "policy" and a "habit" (or "custom," when it comes to a business entity). A decent (albeit nonlegal) illustration of the difference is the late Howie Sugden.* Howie had a policy of fighting anyone during pickup hockey games who, in his opinion, "played cheap." So while there was a decent chance his gloves might come off whenever he took the ice, it wasn't necessarily guaranteed. But when it came to his smoking, that was a habit. The man lived his life in twenty-minute intervals. The devotion to his unfiltered Player's Navy Cuts was unrivaled. When movie theaters stopped allowing smoking, there was only one viable solution: no more movies. No smoking in planes? No more flying. Pretty simple.

The Rules of Evidence: Swords and Shields at Every Stage of a Case

But in a civil lawsuit, does the difference between a "policy" or a "habit" really matter? Litigators who are not trying cases can be lulled into believing the rules of evidence are not a significant part of their practice. The rules of evidence, the argument goes, only become important during trial. In last month's Juen v. Alain Pinel Realtors, Inc., ___ Cal. App. 5th ___, 2019 WL 1056022 (Feb. 6, 2019), California's Court of Appeal provided a sobering reminder that knowing the rules of evidence is essential at every stage of a case. In Juen, it meant the difference between facing a potential statewide class action instead of compelling an individual plaintiff to arbitration.

In Juen, the plaintiff Bradley Juen hired Alain Pinel Realtors, Inc. ("Pinel") to sell his home in 2008. Seven years later, in 2015, he filed a putative class action on behalf of California residents who (1) used Pinel in a transaction to buy or sell a home, and (2) utilized a software program called TransactionPoint. Id. at *1. The problem, according to Juen, was that Pinel entered into a series of unlawful sublicensing agreements with the software-maker's subsidiaries wherein they would pay fees to Pinel in exchange for TransactionPoint-generated business. Id. at * 1.

Pinel moved to compel arbitration. There was an arbitration clause in Mr. Juen's listing agreement, and it included a mandatory notice provision with spaces for Mr. Juen's and his broker's initials. Id. Pinel had a slight problem when it came to proving its broker signed the arbitration provision: Pinel's copy of the contract was gone. Id. at *2. According to Pinel's document retention policy, files relating to closed sales transactions were kept for five years. Because Mr. Juen's sale closed more than five years before he filed his lawsuit, his agreement was destroyed "pursuant to the normal document retention policy of [Pinel]." Id. at *2. One copy of the agreement—which had come from either Mr. Juen or Pinel's listing agent—showed Mr. Juen's initials to the arbitration agreement, but the space for the Pinel broker was blank. Id. *1.

In an effort to present evidence that the broker had also initialed the arbitration provision, Prinel presented a declaration from the office's managing broker. In addition to providing evidence of Prinel's document retention policy, the declaration attested to the following facts:

1. "[I]t was Pinel's policy, custom, and practice to allow a client [like Mr. Juen] to elect whether to assent to the arbitration provision by initialing [the arbitration paragraph]";

2. "The policy in [the Pinel] office required an agent, like [Mr. Juen's agent] who had obtained a Residential Listing Agreement to promptly present the executed [agreement] to [the managing broker] for [her] review";

4. "In the case of [Mr. Juen's] Residential Listing Agreement, I would have, as a matter of policy and custom and practice, adopted his election of arbitration and initialed [the arbitration provision] on behalf of [Pinel], and placed the original Residential Listing Agreement bearing Plaintiff's initials and my initials ... in the file maintained by [Pinel] on the subject transaction."

The parties agreed that the arbitration provision was a bilateral agreement requiring both parties to assent. Id. at *3. Pinel argued that it met its burden of proving assent through the broker's declaration. Specifically, Pinel argued that the declaration established—through custom and habit evidence—that Pinel had assented by initialing the arbitration provision. Id.

Evidence Code section 1105 provides that "[a]ny otherwise admissible evidence is admissible to prove conduct on a specified occasion in conformity with the habit or custom." "'Habit' means a person's regular or consistent response to a repeated situation. 'Custom' means the routine practice or behavior on the part of a group or organization that is equivalent to the habit of an individual." Id. at *4 n. 2, citing People v. Memro, 38 Cal. 3d 658, 681 n. 22.

The Court explained that "[w]hat is missing is either [1] a statement from [the broker] establishing that it was her habit to account for and review every listing contract executed by [the listing agent], or [2] a declaration from [the listing agent] stating that she either [a] presented it to [the broker] ..., or [b] as a matter of habit ... presented all listing agreements to the broker." Id. at *4. The problems with the broker declaration are highlighted in the illustration below: 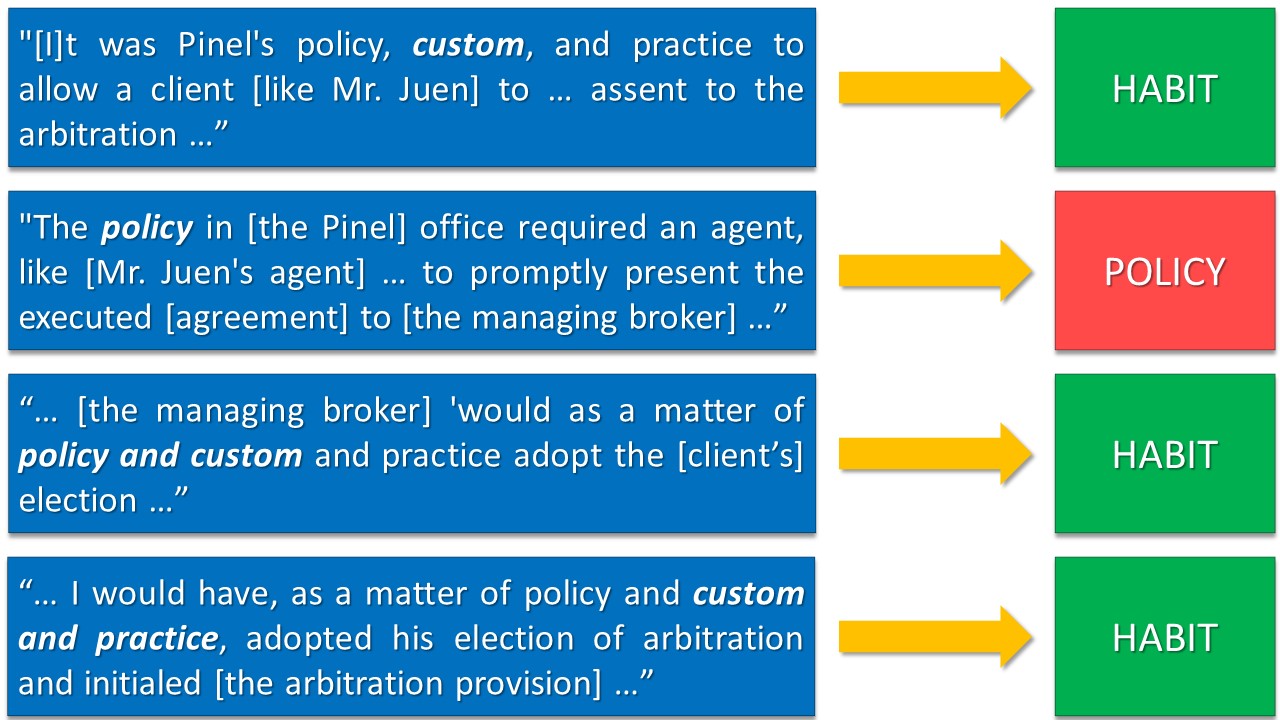 The Juen Court explained that the problem with the broker's declaration was similar to the problem found in Hughes v. Pacific Wharf & Storage Co., 188 Cal. 210, 205 (1922). In Hughes, the Court explained that proof of mailing was not established by a witness' testimony "that it was the general custom of his firm to place letters in a box in the store from which they were taken to the post office." (Emphasis added). While there was evidence of a "custom" to place letters in "a box," there was no habit or custom evidence that the mail was actually "taken to the post office." Hughes, at 221.

In Hughes, the case was retried and "the insufficient foundation cured by the testimony of an employee that he took all letters placed in the box to the post office." Id. at 222. The Juen Court was less charitable. It simply concluded that the defects in the declaration meant that "Pinel ... failed to establish that plaintiff's listing agreement was among those habitually reviewed and initialed by [the broker]...." Juen, WL 1056022 at *4. As a result, the motion to compel arbitration was denied and the putative class action would proceed in state court.