When It Gets Awkward: "Your Honor, I Respectfully Object ... To Your Question." 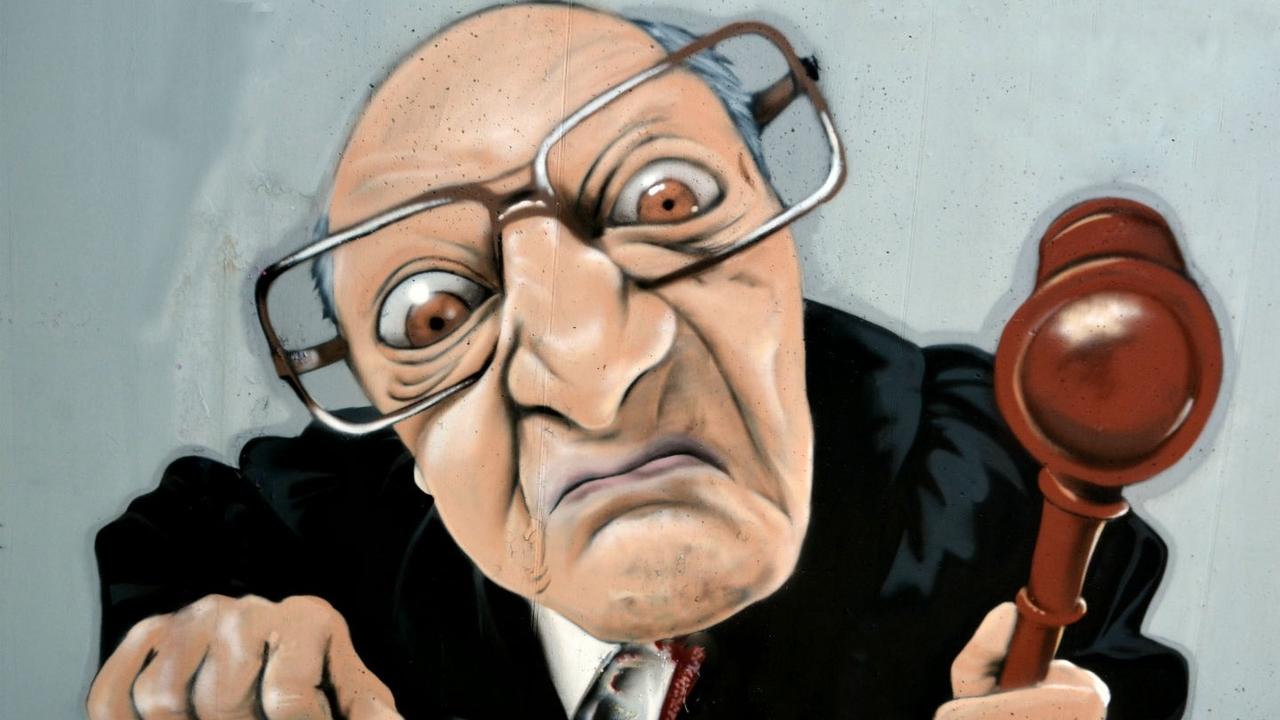 "Nobody ever went to a ballgame to see the umpire," Chief Justice John Roberts declared in the opening remarks to his own confirmation hearings. He is right. It would be a head-scratching moment to go to Dodger Stadium and at the end of a complete game shutout, see Clayton Kershaw high-five his teammates ... and the home plate umpire?

The same goes with jury trials. Advocacy comes from the lawyers. While judges can examine witnesses, they are not to put their thumb on the scales of justice when doing so. Last month's decision in Victaulic Co. v. American Home Assurance Co. et al., No. A146617, 2018 WL 1045220 (Cal. Ct. App., 1st Dist. Feb. 26, 2018) provides a useful discussion about how and when judges should question witnesses. But Victaulic is also an important case because it deals with the admissibility of RFA denials and how to deal with a witness who does not complete her trial testimony (because of the exercise of a valid privilege).

Victaulic Company develops and manufactures various plumbing products. Victaulic was insured by the American Insurance Group (AIG). The primary risk covered by the insurance—and the risk at issue in the case—was product failure. Id. at *2. Beginning in 2012, a series of product failure claims were made against Victaulic. Victaulic tendered the claims to AIG, and AIG retained counsel to defend Victaulic. However, AIG also sought a judicial determination that it did not owe Victaulic any coverage. AIG argued that the product failures were non-covered "business risks," as opposed to "property damage" from a covered "occurrence." Id. at *4.

Victaulic ultimately brought a lawsuit in California, alleging it had to pay "substantial sums" to defend itself in the product failure cases. Id. at *5. AIG filed an answer denying the allegations along with a cross-complaint seeking a judicial declaration that it did not owe payments on any of the claims where a defense was provided. Id.

Trial started in February 2015. Id. at *6. The trial was bifurcated, and the bulk of Victaulic's claim in the jury-portion was its bad faith claim against AIG. Id. Among the witnesses called during this stage was Nancy Finberg. Finberg was an experienced claims person for AIG. Id. at *8. Finberg was personally involved in some of the product failure claims made against Victaulic. Finberg had also verified some pretrial requests for admission (RFAs) and was designated as AIG's person most knowledgeable (PMK) on a number of issues in a pretrial deposition.

Victaulic's counsel called Finberg as an adverse witness pursuant to California Evidence Code section 776. Among the issues Victaulic's counsel sought to question Finberg about was the conflict between (1) a statement she made in the claims file, and (2) her verified response in an RFA. In the claims file, Finberg admitted there was potential for coverage. But when asked to admit the same thing in an RFA, Finberg verified AIG's response under penalty of perjury as follows: "Deny." Id. at *8.

Let us first consider the court's decision to allow her to be examined about an RFA denial, because the rule is a simple one: RFA denials are inadmissible at trial. Gonsalves v. Li, 232 Cal. App. 4th 1406, 1415 - 16 (2015). Gonsalves reasoned that questioning a witness in front of a jury about an RFA denial is improper because—like impermissible legal contention questions in a deposition—it requires the witness "to make a 'law-to-fact' application that is beyond most lay persons." Id. at 1415, citing Rifkind v. Superior Court, 22 Cal. App. 4th 1255 (1994). Victaulic made two arguments to distinguish Gonsalves.

Victaulic's second argument was that Gonsalves carved out an exception for insurance bad faith cases. Id. at *15. Gonsalves has a footnote that states, "[a]t least one court has held that such refusal may be relevant evidence of bad faith at trial in bad faith insurance cases." Id., citing Home Ins. Co. v. Owens, 573 So. 2d 343, 344 (Fla. Dist. Ct. App. 1990). The Court rejected the idea that Gonsalves created an exception; Gonsalves merely noted the Owens ruling without endorsing it. Victaulic, 2018 WL 1045220 at *15. Moreover, Gonsalves noted that a close reading of Owens provides no detail about how the insured even attempted to use RFA denials; and in fact, the Owens court denied their admission. Id. at *15, n.8. Accordingly, the supposed Owens' exception was dictum, and the Victaulic Court rejected the request to endorse an exception for bad faith insurance cases.

Aggressive Cross-Examination ... By The Judge?

In addition to permitting Finberg to be questioned about the RFA denials, the trial judge decided to step in and question the witness himself. As the Court of Appeal explained, "[t]he story cannot adequately be told by description, or narration, or summation, or paraphrasing. It can only be told by the transcript itself...." Id. at *9. The examination of the RFA responses were as follows:

[MS. FINBERG]: I think I can clear up your confusion.

[MR. JEAN]: Yeah. Please do. I mean, that was an open-ended question, so go ahead.

[MS. FINBERG]: Okay. Thank you. These verifications, these requests for admissions were drafted and provided to me by coverage counsel, Mr. Eads' office.

[MS. FINBERG]: These are legal documents. I'm not an attorney. I'm just an adjuster. And I read them, and I reviewed them with Mr. Eads and his partners and was told "this is a legal position that we're taking in the coverage litigation. We're preserving legal issues. We're asking the Court for guidance, if you will." It had nothing to do with the way I handled my claims. Nobody ever asked me to withdraw a defense or stop handling or change the way I was handling. I signed these as the person most knowledgeable, the legal position asking the Court for guidance.

THE COURT: So you knew it was false when you verified it under penalty of perjury based on your own understanding of the underlying facts? Is that what your telling us?

[MS. FINBERG]: What was false, Your Honor?

THE COURT: It's false that there was, in fact, a potential for coverage under all of those seven. You told us that already today. And what you're telling me is that you signed this under penalty of perjury, and you knew it was false?

[MS. FINBERG]: No, Your Honor. This is not false. I was handling my claims because there was a potential for coverage under all those claims. But these verifications, RFAs, were legal positions that were being taken in the litigation, so ...

THE COURT: So you knew that the underlying facts were that it was true that there was a potential for coverage, and yet you write in your verification that you declare under penalty of perjury that the foregoing responses are true and correct?

[MS. FINBERG]: Right, because that was true and correct to the legal position that was being taken.

[MS. FINBERG]: So I wasn't being inconsistent.

THE COURT: I understand now. The facts don't matter. Is that what your telling me?

[MS. FINBERG]: The facts don't matter in this litigation.

THE COURT: All right.

THE COURT: May I see counsel in my chambers.

The Court concluded that the trial court's questioning constituted misconduct warranting reversal of the verdict. The Court explained that "any fair reading of the transcript ... lends support to the insurer's contention that the court 'openly mocked Finberg on the stand, acting as an advocate for Victaulic.'" Victaulic, 2018 WL 1045220 at *17.

Following the trial judge's examination of Finberg, the judge concluded that she had perjured herself. Before Finberg returned to the witness stand, the judge allowed her the "opportunity to obtain private counsel and either take the Fifth Amendment and refuse to respond to questions or not." Id. at *12. When Finberg returned with private counsel, the trial judge explained that she would take the witness stand and—in front of the jury—determine on a question-by-question basis whether to assert the Fifth Amendment privilege against self-incrimination. Id. at *19.

As an initial matter, it was improper for the court to require the assertion of the Fifth Amendment privilege in front of the jury. The Court explained that "[t]his ruling is hard to comprehend...." Id. at *21. "As the Supreme Court has put it: 'Allowing a witness to be put on the stand to have the witness exercise the privilege before the jury would only invite the jury to make an improper inference' from the invocation of the privilege." Id., citing People v. Frierson, 53 Cal. 3d 730, 743 (1991).

An additional problem was that once Finberg elected to exercise her Fifth Amendment privilege, the trial court refused to strike her testimony. Put another way, "Victaulic was allowed to examine Finberg. The insurers [because Finberg was exercising her Fifth Amendment privilege] was not." Victaulic, 2018 WL 1045220 at * 20. "Where a witness refuses to submit to cross-examination, or is unavailable for that purpose, the conventional remedy is to exclude the witness's testimony on direct.... This rule applies even 'where the refusal to answer is based on a valid claim of privilege." Id. at *20, n.13, citing Fost v. Superior Court, 80 Cal. App. 4th 724, 735-36 (2000). The Court refused to strike Finberg's testimony, "to [a] devastating effect." Id.

Victaulic is an important case that trial counsel should be ready to cite when necessary. If an adversary tries to impeach your witness with an RFA denial, Victaulic provides the most recent authority to explain its inadmissibility. If you are precluded from completing the examination of a witness because he or she becomes unavailable, Victaulic illustrates the perils of the trial judge not striking the testimony. And if the judge starts examining a witness like an umpire calling balls and strikes with too much flair, it may be necessary to object to the judge's question. Delicately.